What is Upcoding and Downcoding in Medical Billing?

For various reasons, Upcoding and downcoding are issues that are concerning to medical professionals and patients alike. For those who are not familiar, let us explain What is Upcoding and Downcoding in Medical Billing?

Medicare and Medicaid have developed specific codes for providers to use in billing the government for patient services. When these codes are altered in such a way as to claim a larger share of reimbursement than is ace, they are considered fraud reportable under the False Claims Act.

Medical fraud has been increasing at alarming rates in the recent past. Upcoding and downcoding are the two most common types of medical billing fraud. Upcoding involves overbilling a patient, while downcoding is the reverse of upcoding which entails under-billing patients.

Healthcare professionals report medical procedures they conduct on patients as per the Current Procedural Terminology code (CPT) set by the American Medical Association (AMA) to facilitate billing. CPT codes are numerical codes that denote diagnoses conducted on patients. The CPT codes help the accountants to calculate the hospital bill you should pay.

When your hospital sends a bill to your payer, that CPT code corresponds to the procedure, and different procedures and services have higher or lower costs. While the code doesn’t directly translate to the payment, the hospital payment should be accurate as long as the bill contains the correct code. 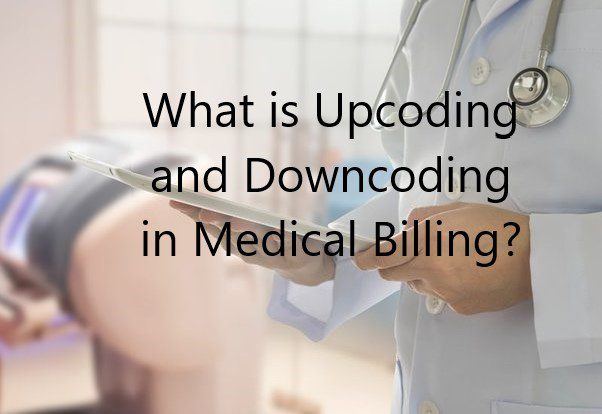 As a piece of the claims-filing process, each service rendered is coded with current procedural terminology codes or CPT codes. A CPT tells the payer what specific service was performed. During treatment, each service is recorded on the patient’s chart, which is then used to document the services that require payment.

Upcoding is when the CPT code listed on the claim is for a service or procedure that is at a higher level than the one performed and listed on the patient chart. This can be deliberate – which is fraudulent and illegal – or by mistake, but either way, it needs to be corrected.

The main risk of upcoding is an audit that reveals your practice has received more money than it was supposed to according to the actual services performed. Earlier this year, the Government Accountability Office reported that the federal government was overbilled by $14.1 billion in 2013 to Medicare Advantage practices. Thus, the government has a vested interest in eliminating overbilling and upcoding.

How to Prevent upcoding?

Make it a point to implement set standards when it comes to reviewing bills before your practice submits them to insurers. Review bills thoroughly and compare them against medical records to catch any errors before they hit the mail.

Because there is so much on the line when it comes to billing and coding errors, it is important that you take the time to hire trustworthy, detail-oriented professionals to fill administrative positions. Furthermore, make training them a priority and focus some of that training on the problems

It may, too, benefit you to hire someone who has a background in coding and fraud prevention to take on the task of reviewing bills before sending them. That way, this person is more likely to spot potential red flags that insurers may notice upon receipt of the bills.

Downcoding is the opposite of upcoding. If you perform a service but record the CPT for a lower-level service, that is downcoding.

Downcoding also leaves you vulnerable to an audit, which is never good. But, it can also cost a practice thousands of dollars a year in lost revenue because you’re not getting the higher rate of pay that you would if you had recorded the service properly.

According to the National Correct Coding Initiative (NCCI):

How to Prevent Downcoding?

It is vital to provide complete and accurate documents to avoid downcoding. Proper documentation helps in proving the necessity of services performed while submitting claims for reimbursement.  Make sure to include necessary documents associated with the patient’s past, family, and social histories, lab test results, X-ray reports, or other diagnostic services, referrals, and consultation reports.

Use Billing Software but Consult Experts too

While billing software plays an important role in increasing the coding, billing, and submission processes they may not always suggest accurate codes. Various codes have more than one or two conditions for accurate coding. Therefore, it is advisable to consult a professional for accurate coding.

Get Familiar with Fee Schedule

Sometimes, Explanation of Benefits (EOB) may include explanations such as ‘level of service/procedure has been adjusted’ to clarify the adjustments that were made in the payment based on the codes mentioned in the claim. This is where the fee schedule comes in. If your coder and/or biller have made any error while coding the procedures/services then you can detect downcoding by comparing the fee schedule with the amount mentioned on the EOB. The Centre for Medicare and Medicaid Services (CMS) defines the fee schedule as “a complete listing of fees used by Medicare to pay doctors or other providers/suppliers.  This comprehensive listing of fee maximums is used to reimburse a physician and/or other providers on a fee-for-service basis.  CMS develops fee schedules for physicians, ambulance services, clinical laboratory services, and durable medical equipment, prosthetics, orthotics, and supplies.”

Consequences of Upcoding and Downcoding

Medical fraud perpetrators are prone to various legal ramifications when caught. Some of the consequences include

How to Report Medical Fraud

You are highly encouraged to report medical fraud if you suspect inconsistencies in your medical bills. Medicare and Medicaid beneficiaries are the major victims of medical fraud.

Upcoding and downcoding can hurt a practice. Avoiding them should be a practice’s main priority when it comes to billing. Contract with a medical billing company to handle your coding and billing so you can eliminate coding errors before they create compliance problems. This eliminates the risk of your staff committing errors, puts coding in the hands of trained professionals, and saves money. By outsourcing to a professional medical biller, you can avoid mistakes that are caused by inexperienced medical billers and coders. Having a team of qualified medical billers and coders who can expertly keep track of the thousands of medical codes, diagnoses, and outpatient procedures can help you reduce claim denials. This also ensures that your staff will no longer need to spend time on these billing concerns. You and your staff can then use this freed-up time to focus on patient care.